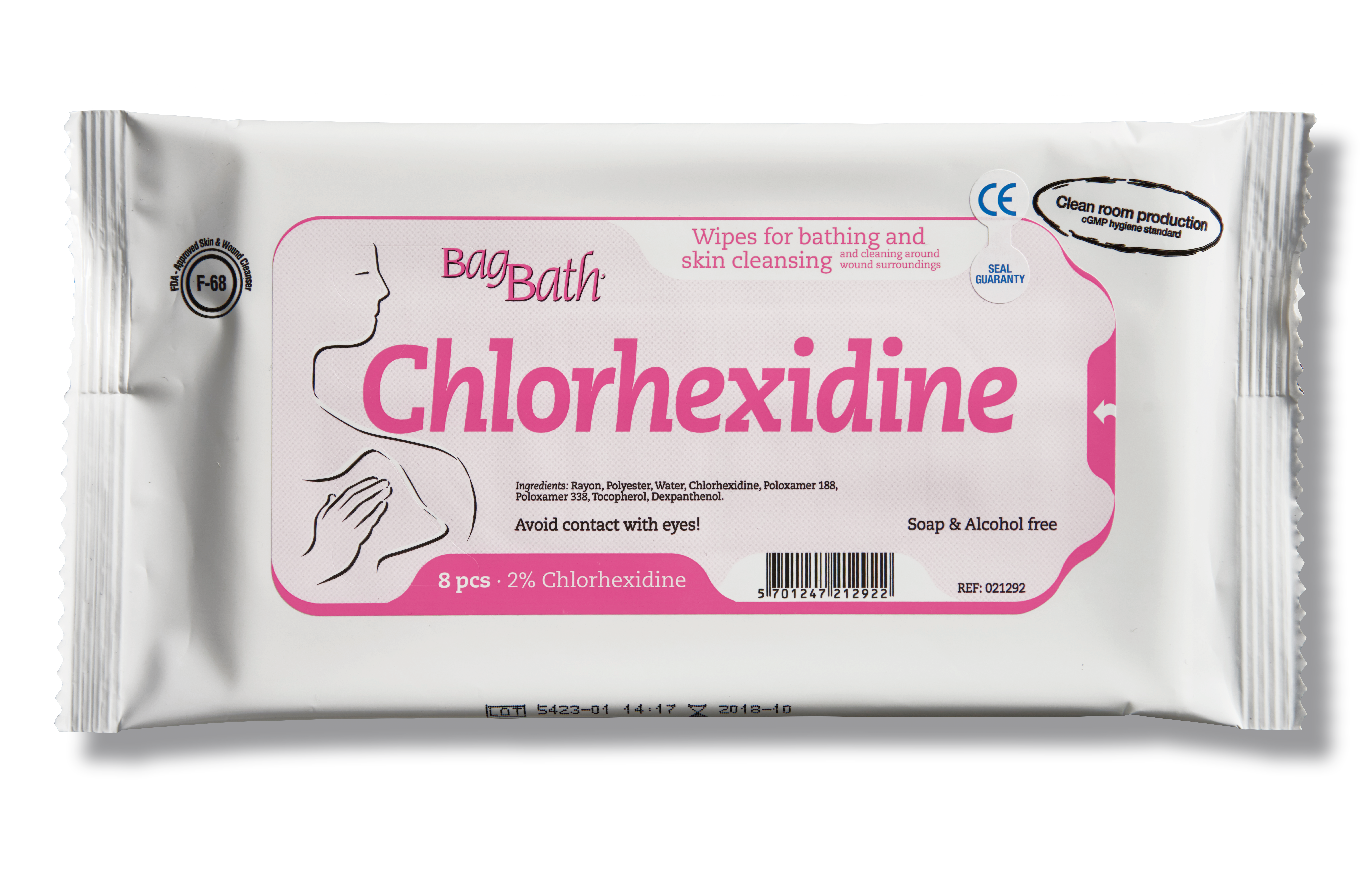 BagBath® Chlorhexidine contains FDA-approved ingredients and does not contain alcohol or soap. The wipes can used heated or as they are.

Not recommended for premature children younger than 2 months.

Critically ill patients often have an impaired immune system, which increases the risk of nosocomial infections.

A number of recent studies show that performing a daily full-body wash and/or disinfection with soap or wipes containing chlorhexidine on critically ill patients admitted to intensive care departments may reduce colonization with microorganisms on the skin and thereby possibly help prevent catheter related infections.

Apodan does not recommend the routine use of chlorhexidine for full-body washing in other patient groups – with the exception of MRSA-carrier conditions.

In addition, full-body washing with chlorhexidine has shown to have an effect in special situations, such as recurrent familial furunculosis (skin infection) caused by Staphylococcus Aureus.

Reduces the number of organisms

To prevent infections from occurring later, the skin can be locally cleaned and disinfected at home before an intervention. Wash the skin with BagBath® Chlorhexidine 2% to remove organic matter and reduce the number of multiresistant organisms usually found on the skin. Full-body washing with BagBath® Chlorhexidine 2% preoperatively is not recommended.

Many Nosocomial Infections, including postoperative wound infections, are brought about by bacteria already present on the patient’s skin. Washing with Chlorhexidine can help reduce the risk of MDRO (Multi-Drug Resistant Organisms) and the development of hospital-acquired infections in the blood.

Chlorhexidine is a chemical antiseptic substance with a potent antibacterial activity. It is both bactericidal (kills bacteria) and bacteriostatic (inhibits bacteria – inhibits the growth and division of bacteria), and provides long-term protection of the skin.

Chlorhexidine provides bacterial action against a broad spectrum of microorganisms. Organisms against which it is effective include: Escherichia Coli, Enterococcus Hirae,
Staphylococcus Aureus, and Pseudomonas Aeruginosa.

If cream is used afterwards, it is recommended to employ non-ionic creams because some types of cream can reduce the disinfectant action of chlorhexidine.